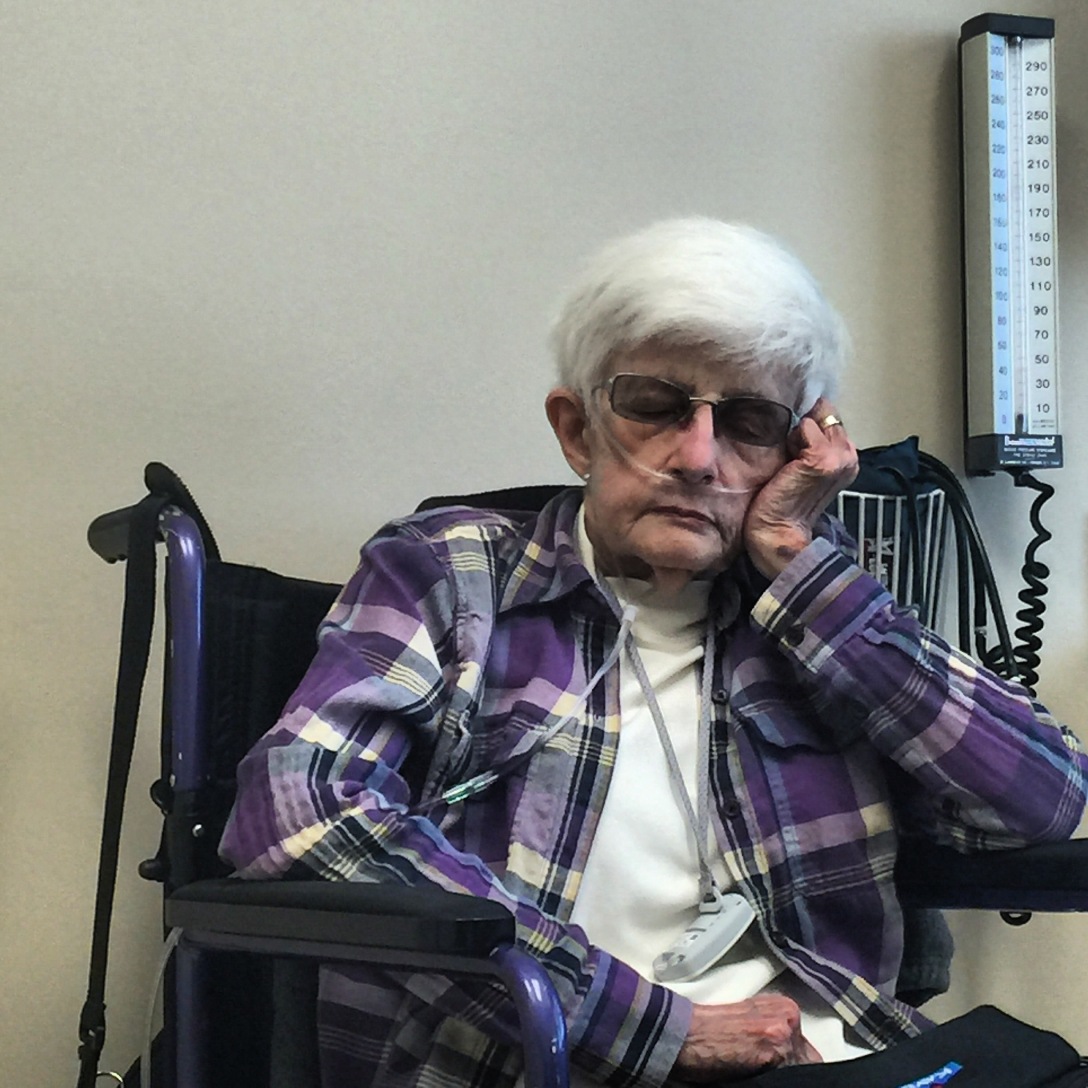 I very nearly fell apart on Thursday. Sometimes the cause of the near-falling apart is not the real reason, which is what I think happened on Thursday. Anyway. I’ll get to that in a bit.

The short(ish) backdrop is that Mom had an eye appointment a couple of weeks ago during which the optometrist told her that her heart medicine was causing swirls in her cornea. Not too big a deal, he said, but you might want to see your doctor to talk about the heart meds. And, you have some clouding on the capsule of the lenses that were put in from the cataract surgery, so go see the ophthalmologist about that.

Off we went on Thursday, first to the ophthalmologist, who said a) all patients on this particular heart drug have the swirly cornea thing, and you shouldn’t get off the heart med and b) the lens thing (I’m putting this in non-doctor speak, obviously) is moderate but not causing vision issues, so you can decide whether to have this laser procedure if you want, to which Mom said I suppose not, then.

Off to doctor #2, who happens to be my GP and a wonderful doctor. We no longer needed to talk about the heart med, but Mom said she was wondering about her thyroid, because she was tired all the time (she fell asleep while we were waiting for the doctor), and could she get off the blood pressure meds and potassium she was taking because of them (yes), and she had a little cough and pain in her side she was worrying about (first I’d heard of either of these). Down we went to the lab for bloodwork.

So the thing(s) that caused the near meltdown for me were that a) we had a giant shopping/errand list, but by the time we had done all of this and eaten lunch we had been gone for six hours and I knew there was no way Mom could go and do the other errands, and b) while Mom was waiting to have blood drawn I had to sprint to the car because her oxygen tank was dangerously low (and the regulator wasn’t working) and when I got back she wasn’t there, so I felt like the biggest jerk in the world for letting her tank get so low and leaving her by herself in her wheelchair in the waiting room, and c) in the midst of all of this one of my department chairs called with a work crisis (two of my faculty were in a car accident), so I was wracked with guilt about being away from work, and d) I wanted to go run with my running group but realized there was no way I could take Mom home, go to the store, bring back the groceries and make it to the run, so I’d be missing the run. Again.

I called B and my friend Ginger, who got me calmed down, went to the store, fixed dinner to take to Mom’s later and collapsed in a heap on the sofa, when I began to realize the real reason for the near-meltdown, which is, of course, that my mother is dying.

And the ophthalmologist had said, okay, we’ll recheck you in a year. She hasn’t got a year, you idiot! What a stupid thing to say! And Dr. W, my GP, was incredibly kind, but in his pragmatic way, that certain tests and so forth just really weren’t practical, that the focus was on her comfort and quality of life. “End of life care,” read the paperwork the nurse handed me.

Friday I called to get her test results: nothing he didn’t expect, said Dr. W’s nurse. Elevated C02, secondary to the COPD. Elevated white blood count, secondary to the steroids. Lowered albumin, secondary to protein malnutrition. The thyroid? Normal. Which means that her fatigue is what her hospice social worker told me, that she would begin sleeping more and more.

It’s hard to balance the two parts of this: the sturdy, persevering mom that my beloved Kaykay says appeared much better than she had anticipated, or that Ginger says is the hardiest dying person she’s ever seen, or the mom I see in the kitchen baking cookies or working on a sewing project for me for school, just like I’ve seen a hundred times over the years — and the reality that my mother is dying.

I cannot let my brain go there, because the mere thought nearly brings me to my knees. I feel like when she hugs me these days she’s holding me just a little tighter, a little longer, the dying mother comforting the falling apart daughter, and I hug back a few more seconds still, because I am not ready to let her go.

View all posts by Gail S.